Insurance is a critical life skill

Having the insight and knowledge to manage risk is a critical life skill, enabling young adults to successfully leverage opportunities without falling into debt or suffering crippling loss in their early lives and careers.

Youth month presents parents with an “opportunity to have that critical ‘insurance talk’ with their children about managing the opportunities – as well as the risks – of adult life,” says Christelle Colman, insurance expert at Old Mutual Insure.

Young people, especially young men’s, vehicle premiums and excesses are usually higher. In some instances, three times higher than the average. So, while tempting to list “your son’s varsity vehicle on your own vehicle policy, if he is not listed as the permanent driver of the vehicle, insurers are unlikely to pay out in the event of accident or loss,” says Colman. You also put yourself at risk of committing fraud if the information is withheld from the insurer on purpose.

Even more importantly, however, says Colman, “you miss a golden opportunity to teach your child a critical lesson about the correct use and value of insurance.”

Colman has seen countless instances of young people with vehicle cover added to their parents policies develop no understanding of insurance at all, “treating cover as an excuse for reckless and irresponsible behavior in the mistaken belief that they can do as they please and someone else will pick up the bill or manage the consequences”. This instills a very poor understanding of and attitude towards insurance.

Insurance is not a blank cheque to behave irresponsibly. If it is proved that a child drove recklessly at the time of the loss, insurers will in all likelihood not pay out, regardless of the cover they have. Similarly, if a child’s vehicle has been added to a parent’s policy without clearly stating that the child is the regular driver, insurers are unlikely to respond in the event of damage or loss.

Insurance is a relationship

Instead, by taking out policies in the name of the child early on in life and having the child contribute, even if only in a small way, to premiums and excesses when these apply, parents can teach children that insurance is not only an important part of the monthly budgeting process but that it is also about building a relationship with your insurer. In this relationship, “if you disclose honestly, behave responsibly and manage your assets correctly the insurer will reward you with competitive premiums and fast claims settlement when accidents occur” says Colman.

The cost of insurance is also largely determined by claims’ experience and risk profile, especially vehicle insurance. Allowing a child to build up their own track record and history of cover is important as, in time, it will make a difference to their own cost of cover. If an 18-year-old child starts driving under their own policy and has no claims even for a few years, by the time they are 21 their premiums and excess will already have diminished significantly. “Paying those higher premiums for just a few years while they are younger can result in significantly lower premiums as they mature, especially if they drive cautiously,” says Colman.

Since insurers look at both the age of the driver as well as how long they have been a licensed driver, “it doesn’t help to keep children on parents’ policies until they are 25 or 30 years old,” says Christelle. This might save premium in the early years, but if you are a 35-year-old driver getting cover for the first time you could be treated as a first-time driver from a premium perspective,” warns Colman.

Instill caution and moderation as values

The kind of vehicle that a young adult has while studying or starting out in life is important too – from both a safety and a premium perspective.

A solid older vehicle with a moderate to low engine capacity, attracts a far lower premium than a new model with a high capacity engine. It is also less likely to enable reckless behavior.

“You don’t need the latest sports model to get to varsity and back, or from your digs in Melville to your first job in Braamfontein,” says Colman. It is also very important where the car is kept. It is, for example, “prohibitively expensive to insure even an old jalopy if it is parked on the street outside a digs in Observatory or Rondebosch each night,” she says. In fact, “some insurers won’t provide cover for cars that park on the street at all,” says Colman.

Learning the right behavior early on can make all the difference.

As a young person it is better to learn the right precautionary behavior and, “avoid loss altogether by practicing good personal risk management,” advises Colman.

Don’t leave laptops in vehicles, especially where they can be seen. Put gym or other bags in the boot or take them with you. Replacing contents is expensive. It is also expensive to replace smashed vehicle windows and locks and doors damaged by criminals breaking into vehicles because valuables were visible. In fact, many policies exclude cover for items not kept in a locked boot or compartment of the vehicle.  Lock gym lockers with your own lock. Choose a secure digs and share accommodation with security and safety-conscious housemates.

While enforcement is, at best, patchy in South Africa, “the major danger with drunk driving is having an accident and injuring yourself or damaging the vehicle, or worse still, injuring or killing others,” says Colman. Beyond a criminal charge and a permanent record, the impact of alcohol and drunk driving on families and broader communities, especially where lives have been lost, is devastating. Killing or crippling someone while driving over the alcohol limit is not something that anyone ever recovers from, “whether you were the perpetrator or the impacted,” says Colman.

Even if no one was killed or injured, damaging a multi-million rand sports car with a varsity jalopy can expose students and their families to millions of rands in civil claims – that the insurer will not cover if the driver was over the limit or had disclosed poorly. And, from an insurance perspective, marijuana is treated no differently.

In an age of Uber and other ride-hail services, when unable to drive, “it is simply a matter of ensuring that the vehicle is parked securely and then hailing a ride home,” says Colman.

In an age of telematics, with recorded purchase agreements and instantly available mobile phone records, insurers can check accident times, identify who was driving, and, since blood tests are always insisted on in cases of serious accident and injury, what condition the driver was in at the time of the accident. Gone are the days of, “disappearing from the scene of the accident and hoping to appear, sober and collected, the next day to pick up your vehicle,” says Colman. Today, “ancillary technology, connectivity and social media provides an almost complete picture of every accident before we have even read the reports,” adds Colman. Despite this, “non-disclosure remains one of the biggest drivers of claims rejection, especially amongst young drivers,” says Colman.

Youth Month is a reminder that be best way for young people to understand risk and deploy insurance affordably and effectively to is to learn from their parents.

The best way for young people to learn to use insurance to effectively manage risk, is to understand what insurance is for, how it works and what it costs, “including the dual responsibility of both the  insured and the insurer for full disclosure and prudent and sensible behavior,” says Colman.

Having the insurance conversation is as important as the other critical conversations that parents should be having with their children. Understating and using insurance effectively is an essential element of becoming responsible citizens, “of a global society and economy in which the ability to manage risk is a key determinant of long term safety, prosperity and personal success,” concludes Colman. 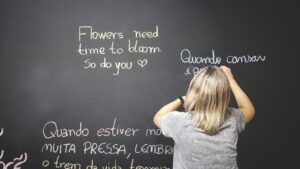 Benefits of Being Bilingual

Rapid tech advancements over the last couple of decades have reduced the world to a global, almost homogeneous, village. This comes with a host of benefits. From a business standpoint, local and regional businesses now have an easier and more certain route to global expansion. They can interact with multinational customers on social media, the […]

With all eyes directed at 2020’s first-year students as they start their journeys at various tertiary and higher education institutions across South Africa, it is also important to remember those tens of thousands of students who are starting out on a learning journey of another kind — studying from home via distance learning, an education […]

Even though we all have the same 24 hours in a day, some people manage their time much more effectively than others. While motivation plays an important role in this process, having good time management skills is what enables students to use their time more productively and ensure better academic performance while not sacrificing sleep […]