Why eSports is growing in South Africa

Over the past couple of years, gaming as a sport has been growing in South Africa. While eSports in SA may not be at the same level as it is overseas, it’s on its way to becoming a real sport in South Africa. So what is contributing to this growth of competitive gaming in the country?

There are many gaming tournaments that take place annually throughout South Africa. With Counter-Strike: Global Offensive and Dota 2 being the two most popular games played in the country. As these tournaments have grown, the prize pools have become bigger and the competition has become fiercer.

At the beginning of 2016, Telkom’s Digital Gaming League announced the country’s first R1-million eSports tournament. Since then we’ve been seeing an increase in the prize pools for competitive gaming. As more money gets invested into eSports, the more exposure it gets and the better it will be for local gamers.

It’s not only available through live-streaming

When it comes to eSports, most people watch their favourite teams compete in tournaments on online platforms such as Twitch. However, this has started to change as eSports is no longer confined to online platforms.

This is because sports channels have started to air eSports events, with South Africa’s SuperSport channel having debuted its first competitive gaming event in March last year. The GINX eSports channel is also set to launch this year on DStv and on SuperSport’s website.

This means that competitive gaming will start to become a regular feature alongside other sports, such as rugby. While SuperSport doesn’t regularly air local tournaments, this will likely change as the local scene continues to grow.

While the focus of eSports in South Africa has been on the bigger tournaments, such as rAge’s NAG LAN. There has also been a growth of competitive gaming in schools. This is because when playing against provincial teams and other schools, students can earn colours for their competitive gaming.

Mind Sports South Africa (the national controlling body for sporting disciplines) can award students with Regional, Provincial, National, and even Protea Colours for gaming. While conventional sports are still more popular at the school level, getting young people interested means that the eSports will keep growing in the future.

There is still much to be done if we want to be at the same level as competitive gaming in America and Europe. But the work is being done, and soon South African eSports will be able to catch up to the international gaming scene.

Security cameras? Here’s what you should be thinking about

South Africa’s most recent crime stats from the South African Police Service show that robberies at residences increased by 7.6% in Q1 of this year, compared to the same period in 2020. It was the crime with the fifth highest increase from January to March. 1 “As we know, security is a key area of importance […] 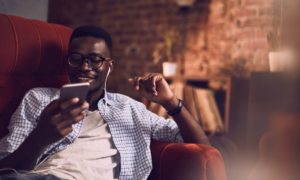 The ever-growing popularity of music streaming

Earlier this year, Rolling Stone Magazine reported that paid music streaming subscriptions in the US experienced their biggest year-on-year jump in 2020. Some 15 million people signed up for various platforms for the first time, bringing the total number of paying North American subscribers to more than 75 million people.  This astronomical rise of interest in music streaming […]

Drawing up a Will and Testament is often forgotten and, in most cases, passing on without a will can turn out to be an expensive and time-consuming process for beneficiaries.  Old Mutual has simplified the will drafting process, by introducing an online platform that makes it possible for anyone over the age of 16 to […]