‘Tis the festive season, which means time spent with family and friends, watching Christmas movies and eating lots and lots of food. Come take a look at 9 yummy festive foods from around the world that you 100% have to try. Like, ASAP.

The humble mince pie. The day these get stocked in the shops, people either sigh at the fact the year is almost over, or rejoice at the prospect of living off mince pies for the next couple months (#guilty).

Back in the day, mince pies used to have minced meat in them and were mixed with a variety of fruits and spices. Since then, the recipe has become predominantly sweet, with most including mixed fruits such as raisins, cranberries and lemon/orange rind, all encased in pastry goodness.

Heat them up and pour some cream over the top for an extra-special treat. You’re welcome.

A bûche de Noël, or yule log, is an absolute winner during the festive season. With lots of varieties, you’re bound to find one that tickles your taste buds.

From sponge filling to chestnut paste, chocolate buttercream to the ganache, once you’ve found your fave variety, the bûche can be sprinkled with icing sugar and berries to make the log-like desert seem that little more festive.

To finish off the log look, a fork is run over the top and the sides to create the marks found in tree branches. Instagram-worthy for sure and also worthy of our list of festive foods.

The famous dessert that both Aussies and Kiwis try to claim as their own, pavlova sure deserves to be fought over. Yup, it’s that tasty.

Pavlova is a typically meringue-based dessert with a crunchy outside and is topped with fresh fruit and whipped cream (and sometimes fruit coulis).

With that much fruit, we can pass this one off as the ‘healthy’ option. Right? ?

Commonly known as the ‘Dutch Doughnut’, oliebol is traditionally made to be enjoyed during New Year celebrations.

An oliebol has a similar vibe to doughnuts that we know and love. It’s a deep-fried pastry which can be filled with a variety of goodies such as raisins.

They can be enjoyed hot or cold (hot is our fave) and you’ll find icing sugar sprinkled over the top. The Dutch take their oliebollen seriously: each year there’s a contest to find the best oliebol in the country. Count us in for samples.

Move over pumpkin pie, we’re talking about pecan pie today. Eaten at Thanksgiving, Christmas and other special occasions, a pecan pie is filled with a mixture of eggs, butter, sugar and pecans.

To make things a little more merry, variations include additions of maple syrup, whiskey and even chocolate.

Fit for those with even the sweetest tooth, the gooey pie filling and crunchy crust make for a yummy festive treat.

This Italian sweet bread loaf is most usually eaten around the Christmas and New Year period. With a super soft, almost brioche-like, dough panettone is about as moreish as it comes.

Panettone is great when teamed with a sweet wine, toasted, or simply enjoyed on its own.

As the nights start getting longer and the temperature gets colder, it’s not all doom and gloom in France. Why? Because a delicacy known as galette des rois graces pâtisseries and stores across the country.

Traditionally eaten on 6 January to celebrate Epiphany, the galette is made from puff pastry and filled with frangipane (aka almond deliciousness). There are loads of different variations though depending on where you are in France.

To make the whole thing even better, traditionally a little porcelain or plastic figurine, called a fève, is hidden inside the galette’s filling. If the fèveis in your slice, you are made king (or queen ?) for the day. When buying from the stores, a paper crown is included for the lucky person.

Although Glühwein (mulled wine) is enjoyed in many countries, you’d be hard-pressed to beat a mug of the stuff at a traditional German Christmas market.

Cue all the cosy vibes and sip on warm wine infused with spices and fruits as you browse the cute stalls filled with Christmas treats and gifts.

You can make mulled wine at home pretty easily too, so there’s no excuse not to get into the festive spirit.

Nope, this one isn’t a joke. Japan celebrates Christmas with KFC. Estimates say that around 3.6 million Japanese families get KFC fried chicken every year at Christmas.

But it’s not a case of simply showing up to your local KFC and ordering a takeaway. The Christmas dinner packages usually need to be ordered waaay in advance to guarantee no queueing for hours. Talk about preparation! 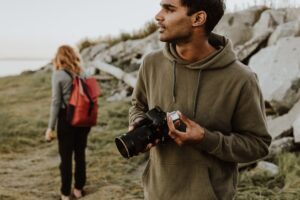 You will agree with me that thanks to the coronavirus pandemic, the year 2020 is literally a lost year in most aspects of life. Countries have closed their borders for the better part of 2020 and the movement of persons within countries has been limited thanks to lockdowns, cessations, and curfews. A large number of […]

Traveling as a College Student (During the Pandemic) – Tips & Resources

The fact that coronavirus changed the way we live is not merely a blind guess anymore. It did change everything – starting from the things that we buy and find essential for our lives, to the way we work and travel. Another thing that changed tremendously since March of this year is the way we […]

How to Protect Your Digital Life When Traveling

In this era of digitalization, it is impossible to go on a trip without your digital devices. You will need them in the course of your journey for various transactions. These devices are a store to most of your personal information, which can compromise the security of your privacy if it is lost. That is […]